Dairy Contrary . . How will the Future Go?

Stage 1: Great enterprises can become insulated by success; accumulated momentum can carry an enterprise forward for awhile, even if its leaders make poor decisions or lose discipline. Stage 1 kicks in when people become arrogant and lose sight of the true underlying factors that created success in the first place.

Stage 2: More scale, more growth, more acclaim, more of whatever those in power see as “success.” Companies stray from disciplined creativity that made them successful in the first place and make undisciplined leaps into areas where they cannot be great or grow faster through excellence. This is largely due to not having ability to have the right people in the right place i.e. getting out over its skis.

Stage 3: Not recognizing internal warning signs, explaining away issues as “temporary, or cyclic, or not that bad.” Negative data is discounted, and positive spin is applied to ambiguous data. Leaders blame external factors rather than accept responsibility.

Stage 4: Sharp declines visible to all. Non-responsive leadership or lurching for quick salvations. 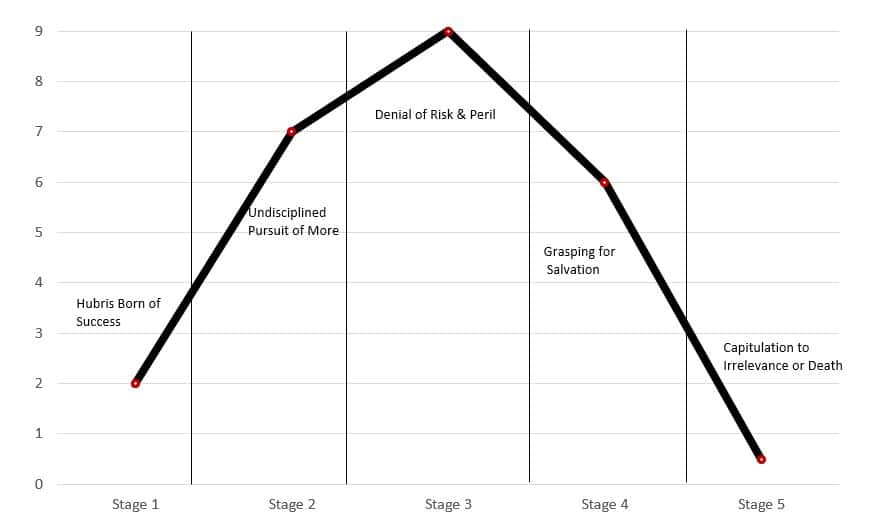 David Packard’s inspirational insight was that a great company is more likely to die of indigestion from too much opportunity, rather than starvation from too little.

No company can consistently grow revenues faster than its ability to get enough of the right people to implement that growth and still become a great company.

An exceptional enterprise depends first and foremost upon having self-managed and self-motivated people – the #1 ingredient for a culture of discipline.

How do employees respond to the question . . .“What do you do?”
a) with a Job title  or  b) with a statement of personal responsibility

Can our people today articulate their responsibilities within our organizations without using their “job titles”?

1.) If Sears Roebuck & Company had remained relevant by listening to consumers, embracing and optimizing technology, and evolving its supply chains over time, would Amazon even exist today?

2) If fast food hamburger restaurants had not continuously innovated menu offerings and preparation processes, would the entities today have a point of difference with consumers i.e. White Castle, McDonald’s, In & Out Burger, Burger King, Wendy’s, etc.

3) If Blockbuster Video had strategically thought about its customers and embraced emerging technologies, would they still be around and “own video streaming” today.

4) Why has Hormel’s Spam™ (canned cooked pork) been able to survive and thrive since it’s introduction in 1937?

5) Would Kodak and Polaroid look different today if they had strategically planned, anticipated and adopted digital technology in lieu of “film technology”?

6) What will the dairy industry of today look like tomorrow, and are we thinking strategically or just trying to “maintain the status quo?” Perhaps the status quo is not so good?

Connect With Us On LinkedIn