The Immune Supporting Properties of Milk

Click here for a downloadable, PDF-version of this article.

During this challenging time, when we seem to lurch from one surge in COVID-19 infections to another, many people are turning towards the dietary or herbal supplement shelves of supermarkets and pharmacies for an extra something to boost their immune system. Of course, vitamins and minerals have a role to play but in some respects consumers neglect other sources of immune support some of which can be found in the refrigerator! It is not as widely appreciated as it should be that milk is a natural, exquisitely designed immune support delivery system. Indeed, one school of thought is that the evolution of milk was driven more by pressure to protect than to nourish! You read that right – the primary purpose of milk is to defend against infection and after that provide an unmatched source of nutrients.

Milk really is a veritable treasure trove of components that buttress the immune system. This multi-part series of articles kicks off with this general introduction. Here, some insight is provided into the architecture of the immune sytem, which is divided into two distinct parts; the adaptive and innate immune systems. The main differences between these distinct parts is explained. The article goes on to list the multiple immunoactive components in milk and identifies their mode of action and to which part of the immune system they belong. Future parts of this series will provide more details about the immuno-functionality of these important dairy ingredients and systems. Timing of this series is opportune as many recent studies have suggested or demonstrated that certain components of milk display potential against coronaviruses and COVID-19. These new developments will be highlighted.

The architecture of the immune system

The adaptive immune system is un(der)developed in many newborns and as a stopgap, suckling young benefit from ready-made antibodies delivered in their mother’s milk. Indeed, the neonates of some species have essentially no adaptive immune capability. For example, foals are particularly vulnerable to life threatening infection during the first weeks of life, if they do not consume the mare’s colostrum within hours of birth.

In summary, colostrum and milk contain copies of the antibodies currently being produced by the lactating mother but do not contain the cellular ‘support’ part of the adaptive immune system. As a result, the antibodies in milk are referred to as being derived from passively acquired adaptive immunity. The immunoglobulin fraction in the whey of colostrum and milk is comprised of those maternal antibodies. The most common and familiar is the ‘Y’ shaped immunoglobulin G (IgG) as illustrated in Figure 1. However, other immunoglobulin types such as secretory IgA and secretory IgM are also present (Table 1). In conclusion, the spectrum of immunoglobulins in a given sample of milk reflects infections that the lactating mother most recently encountered, perhaps during pregnancy and certainly since giving birth. This emphasizes the importance of vaccination of pregnant and breastfeeding mothers as this will result in the secretion of antibodies into her breastmilk that specifically target the antigen present in the vaccine.

The innate (natural) immune system is so named because it is continuously present in the background and does not have to be learned through exposure to an infection. It thus provides an immediate response to infectious agents (e.g., foreign invaders).  A further distinction is that a given component of the innate immune system combats all foreign invaders through one mechanism, but that mechanism is different between the different innate immune system members. Components of the innate immune system recognize only a limited number of identifying substances (antigens) on foreign invaders. However, these antigens are present on multiple rather than a single specific invader. A major difference is that innate immunity, unlike acquired immunity, has no memory capability. It does not remember specific foreign antigens but rather works by a mechanism that attacks a feature that is common across classes of infective agents.

Multiple types of white blood cell such as monocytes, neutrophils, natural killer cells and macrophages are members of the innate system that are not normally found in milk (Figure 1 – Cellular innate immunity panel). Despite this, milk delivers a veritable arsenal of weapons that contribute to the innate immunity as shown in Table 1!  However, their roles are frequently less well recognized as immune supportive by consumers. Due to their ‘broad spectrum’ rather than specific nature, components of the innate system can attack many distinct infectious challenges. For the most part, the members of this group of molecules possess an independent capability to impede bacterial or viral infection and are not as reliant upon the ‘support system’ that lies behind the adaptive system. Anti-infective activities range from crowding out of pathogenic bacteria by competitive inhibition, stimulation of probiotic bacterial growth at the expense of pathogenic bacteria to blocking receptor sites on host cell surfaces or presenting decoy receptors that impede bacterial or viral attachment.

The infant is not completely dependent on receiving the specific antibodies from the mother needed to fight a given infection. Components of the innate system provide critical backup (Table 1) and are highly effective not only in infants but in adults too.

Components of the adaptive and innate immune systems are also differentiated by another property. In almost all cases, activity of the innate system does not trigger an inflammatory response in the manner observed with the fully mature adaptive system. This could be important in certain respiratory infections such as COVID-19, where the inflammatory response stimulated by an acute ‘cytokine storm’ can often prove life threatening (Notz et al., 2020).

Multiple components in milk contribute to the immune system

The main components of milk that contribute to immunity are summarized in Table 1 along with their affiliation to either the adaptive or innate immune systems. As can be seen it is quite a list! Proteins constitute the majority of members but there are also examples of immune-supportive activities present in carbohydrates and lipids. For example, glycosaminoglycans and oligosaccharides contribute both anti-bacterial and anti-viral activity. There are also indications that complex lipid fractions that are present in milk fat globule membrane possess anti-infective and anti-inflammatory properties (Palmano et al., 2020).

Immune supportive components belonging to the innate system operate via a variety of distinct mechanisms. For example, glycosaminoglycans, lactoferrin and osteopontin prevent microbial growth by either preventing attachment or depriving the invader of a key nutrient. Lactoperoxidase and xanthine oxidase/oxidoreductase kill invading bacteria by local generation of reactive oxygen species, whereas lysozyme causes damage to bacterial cell walls which causes cells to burst.

Stay tuned for follow up articles in this series which will home in on the latest research findings involving these interesting milk components and in particular will highlight studies that provide evidence of prevention of or activity against COVID-19 and other viral infections. 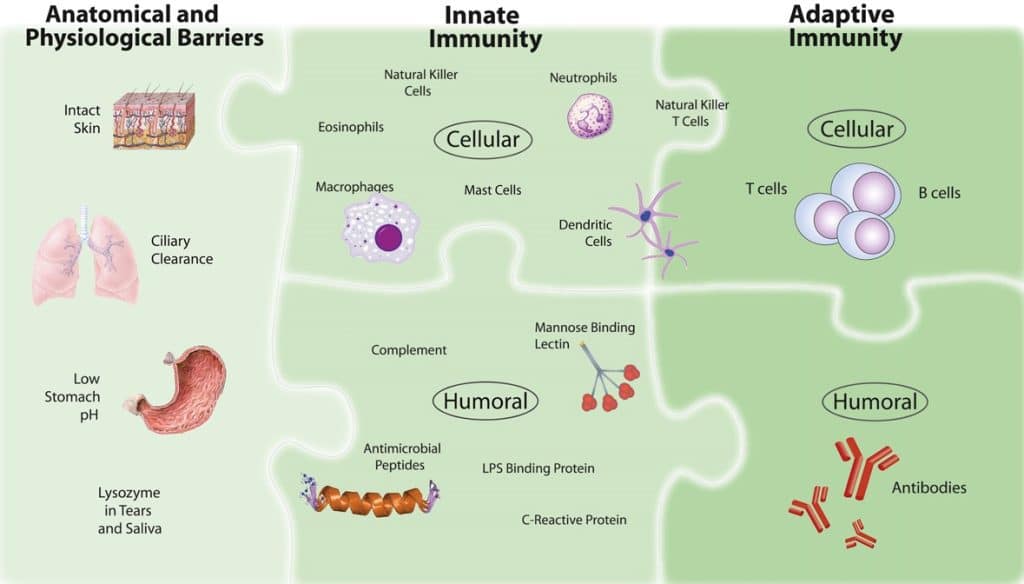 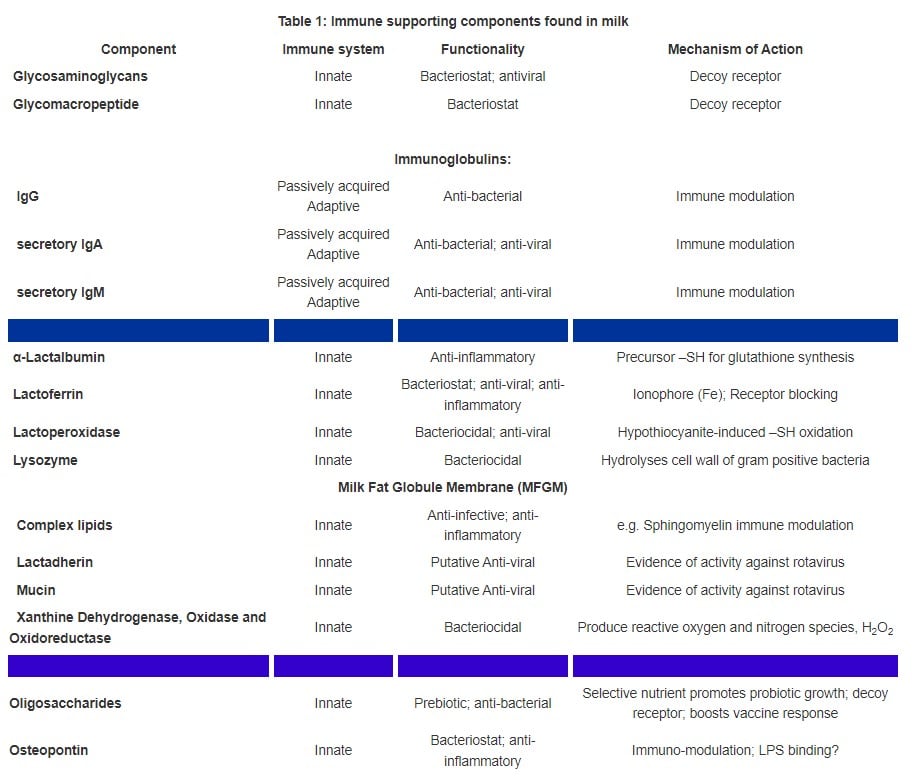 Connect With Us On LinkedIn